Aviation is one of the biggest businesses on the planet with revenue generation amounting to more than $800 billion annually. Over the past decade, the sophistication in technology and increased flyer confidence has really pumped up aviation sales.

Today, more people than ever are opting for air travel which has allowed aviation companies to make a hefty profit in every scale. Reportedly, nearly 3.8 billion people use air travel each year and the demand is only rising.

But at the same time when the aviation industry is truly proliferating, there are big challenges standing in their way. It’s a well-known fact that the aviation business is like a huge clockwork that depends on several parts of the machinery performing their tasks properly.

Anything goes wrong at any place and the entire mechanism suffers. Therefore, International Aviation Consultant’s staff has figured out the top challenges faced by aviation companies worldwide as we consult them. Our aviation consulting company deals with problems faced by all kinds of companies involved in the aviation business and help them overcome with expert guidance.

With the rise in aircraft safety, more people want to jump on-board, which further increases the number of seats required on a plane. While you can’t add more seats to a plane as per will, you have to have more planes flying across the world, which means increased air traffic.

Right now, the air traffic is one of the most notorious problems faced by airports because some of them are literally overflowing with incoming and outgoing flights.

The demand for air traffic has risen considerably and about 7% more people opted for air travel in 2018. New airports are being built across the world to neutralize the ever-increasing traffic but even they need a considerable amount of time.

Increased traffic gives rise to several other consequences such as;

All of the above contributes to unforeseeable problems that the airlines have to deal with. At our aviation consulting company in Australia, this is one of our lines of work. We provide resolutions on staffing and Airport operations for dealing with increasing air traffic. So far, we have projects running in 9 different locations of the world targeting the same.

People are not as much afraid of airplanes falling from the sky due to engine failure rather than they fear terrorist activity. No one has forgotten the big black day of 9/11 and it’ll take a lot of time for people to come out of the dreadful effect it has cast over Americans especially.

Post 9/11, airport security for combating terror activity was strengthened quite strictly. Today, there are thousands of checks made to the airplane before it takes off to count out the possibility of any terror activity.

Airport security agencies, cabin crew, and flight security, everyone play a strong role in making sure that the flights are safer than ever, at least from a terrorist hijack.

But the challenge still stands tall, the chances of terror activity are always unseen. You have to be on your toes on all times when you know that such a threat exists and hundreds of innocent lives are in danger.

Airports and airplanes have become a popular destination for terrorists as there are always large groups of people focussed in one place. It’s easy to bait for someone wanting to cause mass destruction of life and material.

Airplanes and airlines are a business at the end of the day, and business always goes behind the customer. The aviation industry has always set benchmarks for the level of comfort they provide in order to sustain a happy flying experience.

Back in the day, getting a cushiony seat and two meals while your 8-hour long flight was good enough, but today, the standards of flight comfort have increased significantly. No airline wants to be left behind when they make claims of superior flight comfort and exceptional customer service.

All of this is increasing the amount of capital invested by Airlines into making their flights more comfortable while fitting more people into one place. The aisles are shrinking and, and the seats are crunching, because more people want to fly.

Maintaining an optimum level of comfort in such a situation really comes off as a challenge for airline companies as they struggle to make ends meet despite such tight rooms.

There are enough studies that prove that in-flight comfort is one of the most significant factors chosen by travelers when they choose the airline they want to travel with. Hence, everyone wants to be better at providing comfort when it comes to business.

Our aviation consulting company in Australia often deals with developing flight programs that target customer comfort. There’s only so much you can do about it but incorporating innovation in this sector has been a driving factor for airlines and for us.

This is something that airlines often get stuck into for something they have no control over.

The changing political atmosphere and inter-racial tensions always play their part in making things difficult for airlines. History is laden with such examples. The most recent being the barring of flights from Muslim countries by the order of President Trump.

There have been several aircraft hijacks demanding ransom from politically motivated groups that make life difficult for everyone on the plane.

Similarly, whenever aviation policy changes are inflicted by political leaders, the business suffers. There is little to nothing they can do about it.

If something that has truly revolutionized aviation after the invention of airplanes is the technology powering them. Technology has spread its roots to all imaginable sectors of aviation. May it be a coffee vendor on the airport or autopilot on the airplane, technology is fueling the aviation business every day.

At the same time, over dependence on technology invites problems for the aviation industry. We are one of few aviation consulting companies who has worked with ICAO to aid the development of safety programs. We found out that while state of the art technology makes life safer for everyone, a single bug down the line can bring the whole system down.

Airlines depend on technology for everything from flight booking to maintaining contact with airplanes. You make a small disruption anywhere in the clockwork and the costs are large to pay. Technological failures have proved to be daunting for airports and flight managers because they become truly crippled when such a situation arises.

For instance, we recently added Airport Cyber Security to the processes we consult on, in order to provide the aviation companies with the best protection from such disasters.

Technology plays and irrevokable role in strengthening the passenger safety and security, which is why it’s hard to compromise anything in these regards.

The human resource working in a company is the ultimate backbone that makes the company stand on its feet. You can’t run a company without the employees.

The aviation business gives employment to a massive number of people spread across hundreds of different processes. Lately, the relations of employees to their companies have become a hassle for the airlines.

If the labor force suddenly decides to go on a strike, the airlines are up for some heavy losses by the hour. All the above factors that we have discussed so far ultimately lay the burden on the employees, because they’re the one who’d be dealing with increased traffic, terrorism and the like.

Keeping these things in mind, it is natural for employees to feel left out when the airlines are coaxing them to perform at their best (for the best customer experience). You have to expect strikes in such scenarios, and right now strikes, payroll issues, inefficient staffing, all contribute to airlines being shut down.

If you have a proper aviation consulting company in touch to consult on this issue, things can be resolved. We, at a number of times, have helped resolve staffing issues at the airports and brought in Employee Management Systems that help the airlines to keep a track of employees and not to over-stress them. 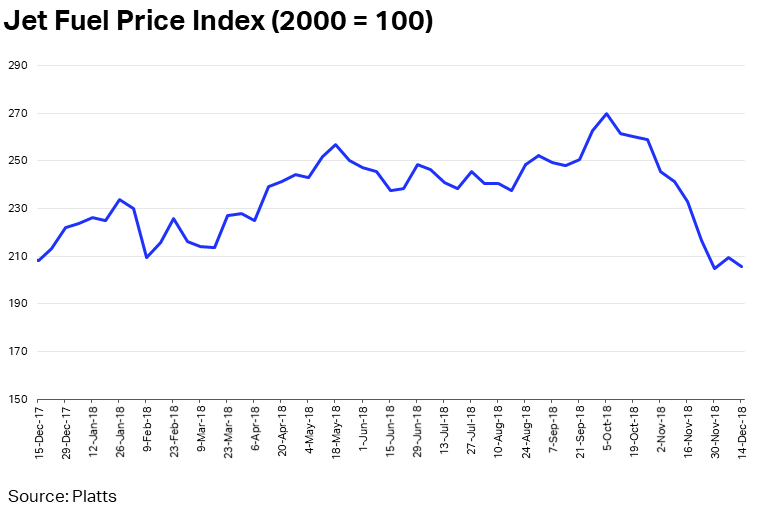 The inconsistency in Fuel prices is a major roadblock for airline companies to maintain profitability with their services.

As evident from the above graph, just in the past 14 months, the fuel prices have covered the entire spectrum of the graph. It becomes egregiously difficult to offer the same level of customer service to the passengers without hiking the flight rates too much or slashing them beneath the line of profitability.

Acquiring the services of an experienced aviation consulting company like ours is going to be trend among the companies once the challenges become actual problems.